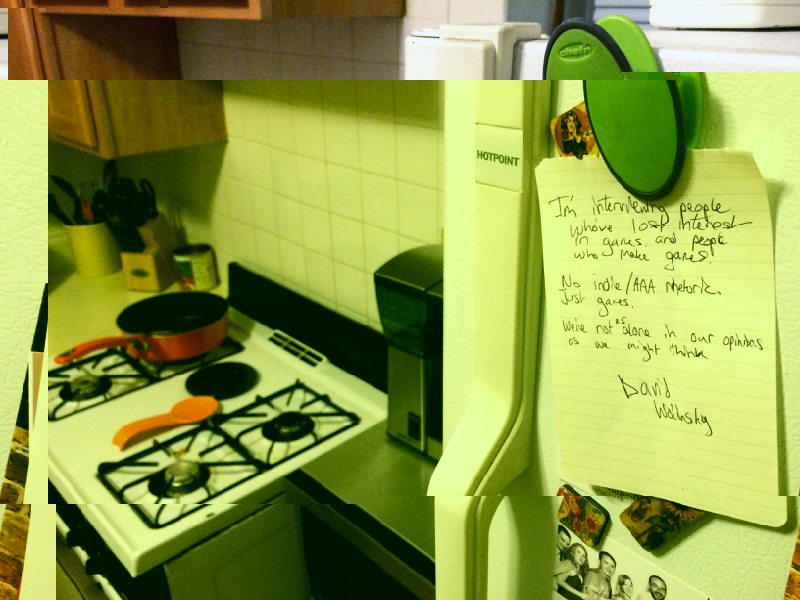 Don't Die (2014-present) is an interview series locking horns with videogames as a beloved, but often misunderstood and maligned cultural force. But it isn't really only about videogames. It's an attempt to take stock of and understand the ways that videogames and their close cousins, the internet and social media, have blended and helped define lines in the digital sand that decide, dictate, and influence what we pay attention to and who we care about -- and how deeply.

This site is a living index drawing out personal experiences and viewpoints driven by love and fatigue, exploring the fractures, conflicts, evolutions, triumphs, past, and future of videogames and what people think of them. As much as possible, Don't Die seeks to connect and explore how videogames -- the people behind them, and the games themselves -- are following in the paths of other mediums, other disciplines, and other groups of people who have come before.

Don't Die's goal is to provide a place for human conversations with deeper listening.

Don't Die relishes in locating and providing a spotlight for individuals who historically haven't had much of a platform (or ones who might, but aren't heard from often). This comes from a deeper belief that if we continue to hear from the same types of people about the same types of topics over and over again, we'll never hear anything new. We'll never gain a greater understanding.

Don't Die is run by me, David Wolinsky, an award-winning author and journalist. I frequently cover, fixate, and honestly am obsessively curious about the ways the internet has affected our ability to relate to one another and the ways industries resist change and actively exacerbate it. I live to do deep dives on aspects of culture that impact everyone but aren't widely understood -- or given much of a chance to.

I'm a former Onion and NBC editor, and have also worked as an editorial consultant for Adult Swim, Comedy Central, and IFC.

I pour tremendous time, thought, heart, and resources into Don't Die, which remains free and ad-free. If you find any nourishment, solidarity, or appreciation for my labor of love, sparing even just a few bucks would make a huge difference and allow me to keep this going. You can set up either a one-time PayPal or a recurring donation on Patreon. Either would go a long way towards supporting me and my work, which you can also keep up with by subscribing to my very occasional newsletter.

If you find my work useful, or use it in a class or syllabus, please consider donating so I can spend more time on it.

Please don't be shy about pitching yourself for an interview, or suggesting someone else on your radar. I'm looking to include as many perspectives as I can.

Note that Don't Die isn't interested in promotional interviews about an upcoming game or a new studio being formed unless there's an especially compelling or typically unexplored angle in mind.

I am available for media inquiries, speaking engagements, panels, consulting needs, and any other way my work might be useful for your work or needs.

Are you someone who used to play videogames, but stopped b/c you lost interest for some reason? I'd like to talk to you. For a thing. Plz RT